The greatest work of Whistler

If you’ve ever had a thought about what to decorate your living room in and you want something a bit different then the work of Rex Whistler is a very good place to start. Sadly Rex can’t come around and do it himself as he died at the tragically young age of thirty nine in Caen in France in 1944. He was killed whilst on active duty helping out some men from his Welsh Guards tank regiment. This is a terrible shame because he had produced one of the most incredible paintings that has to be seen to be believed at the historic Welsh house of Plas Newydd on the Isle of Ynys Mon (Anglesey). It is here that he painted his fifty eight foot long masterpiece Seascape Fantasy. If you could ever feel like you could disappear into a painting then this is it.  Building Survey Birmingham based Sam Conveyancing can also make things disappear … time.  If you want to save money on time when moving contact them today.

Seascape Fantasy is, as the National Trust describes it, a Capriccio of a Mediterranean Seaport with British and Italian Buildings, the Mountains of Snowdonia, and a Self-portrait wielding a Broom. The whole thing is from a three-dimensional perspective. You appear to be looking out over a quay with moorings and surrounded by the usual maritime paraphernalia. In the distance the brooding Hills of the Snowdonia range bear mute witness to the comings and goings of the ships in the harbour. This view is representative of the one from the large Plas Newydd windows directly behind you. There are examples of Italian and British architecture in the painting throughout. 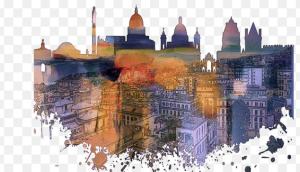 What is most remarkable is that as you approach, to the sides of you, Whistler has carried on the painting to the side walls so that as you turn your head you get the impression you really are walking out onto the quay. On one side a self portrait of Whistler is holding a broom.